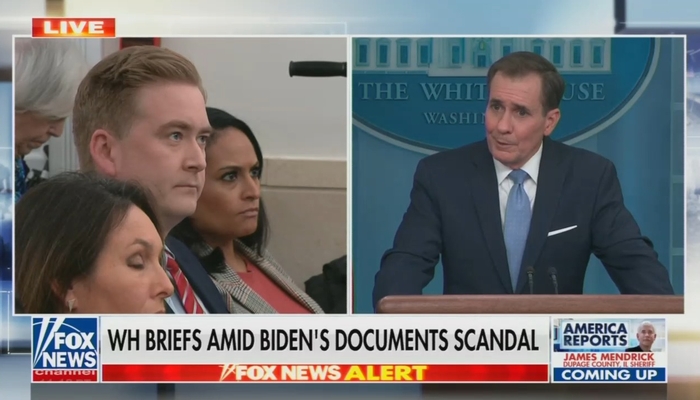 ABC’s MaryAlice Parks went first and cited “bipartisan outrage and frustration over the last few days that there are just more and more disclosures of classified documents showing up in places where they were not supposed to be.”

He then asked: “From a national security perspective…how concerned are you and does the system need reform?”

Initially, it seemed as though Kirby would also duck questions, saying that he’s “going to defer most of the document questions to Karine” and jokingly turning to Jean-Pierre to say, “you’re welcome.”

However, Kirby didn’t stop and reiterated one of Jean-Pierre’s less-standard lines that Biden “takes the treatment of classified materials seriously” before stating his administration does as well: “I can assure you everybody here does too and the National Security Council staff, we deal with classified material every single day. You have to do that.”

Kirby continued to emphasize that “we know what the rules are” and “follow” them because “the procedures exist for a reason and they’ve been developed over many, many years as the nature of classified material has changed down to now including electronic capability, and so, we’re — we’re working at that very, very hard.”

“The — the process of classified material handling…change as technology changes and we’re always reviewing…procedures to make sure they’re fully appropriate,” he added.

Reuters’s Nandita Bose asked another one of the questions Jean-Pierre refused to even consider: “Is there a problem with overclassification of documents?”

Kirby again didn’t dismiss this question and instead said in part that, while he didn’t have anything to announce, “it’s always a balance and you are always trying to meet that balance about whether things are classified appropriately and — and the intelligence community works at this, obviously we work at this.”

With someone other than the far-left political hack Ian Sams (who only talks on the phone in press availabilities the public can’t tune in for), Fox’s Peter Doocy chimed in a few minutes later: “John, how hard is it to walk out of a SCIF with classified material?”

Kirby laid down more markers for the Biden administration, which led to another Doocy question about what the fallout would be for someone who “leave[s] with a piece of classified material that they are not supposed to have” (click “expand”):

DOOCY: And usually what happens to someone in the chain of command if they do leave with a piece of classified material that they are not supposed to have, or that is not secured?

Jean-Pierre eventually had a turn, but she went back to shutting down, refusing to answer questions from AP’s Aamer Madhani on whether “all former presidents” should “scrub…their homes and offices” for classified documents and ABC’s MaryAlice Parks on whether the Biden-Harris administration would commit to ensure they’d leave office with no classified documents.

The real battle Wednesday came with NBC’s Kristen Welker, who started with whether Biden regrets not being as transparent in immediate public disclosure as former Vice President Mike Pence’s team did and then if Biden believes it’s “his responsibility” to fix this bipartisan problem (click “expand”):

WELKER: Karine, a number of lawmakers reacted yesterday to the revelations by former Vice President Mike Pence with some disbelief, saying that, writ large, the system is broken when it comes to top officials handling classified documents. Does the President — does the administration agree with that assessment. And does the President, as the commander-in-chief, feel it’s his responsibility to do something about it?

JEAN-PIERRE: So, look, I know my colleague was just asked this question and I do want to be very careful. This is an ongoing legal matter here.

WELKER: — about the President’s action —

WELKER: — but — but broadly speaking —

WELKER: — here we have a number of current and formers who have now acknowledged —

WELKER: — yes, they found classified documents in their possessions in places that are not secure, the nation’s deepest secrets.

JEAN-PIERRE: — no, I hear the question —

WELKER: Does the President feel like he’s needs to address this?

JEAN-PIERRE: — I — no, I hear the question, and we’re talking about system. You’re asking about how do we move forward. You’re asking, like, what does the President think. And I am telling you that because there is a really — I have to be really careful because there is — there is — this is a legal matter that is happening currently. And any — and for me to comment on anything that’s related to an ongoing investigation, I — that is not something that I can do from here.

Welker’s second line of attack centered around whether Biden would “hold a press conference so that we can ask a range of questions” on this since he had previous said he would “talk…about this soon.”

When Jean-Pierre argued Biden had already talked to reporters, Welker clapped back that he really hasn’t besides a question here or there (in California, Mexico City, and at the White House).

And though the result was the same, credit is in store for AFP’s Sebastian Smith for asking about one of Hunter Biden’s scandals:

SMITH: The House Oversight Committee is looking into Hunter Biden’s art sales or the sales of his own art. Is the White House concerned about that? Does it have any response to it?

JEAN-PIERRE: I will refer you to Hunter Biden’s representatives on this.